A Vegan’s Guide to Vitamin B12

The importance of vitamin B12 in every diet cannot be overstated.

Not only does this vital nutrient carry out a lot of important tasks within your body, but the deficiency in this vitamin can cause serious, sometimes fatal side effects.

Because plant-based foods do not provide adequate amounts of B12, vegans and vegetarians must supplement this nutrient to avoid deficiency.

Article Navigation
The Role of B12 in Health
Am I Getting Enough B12?
Problems with Relia﻿nce on Food Sources
Does That Mean Veganism is Unnatural?
I Probably Don’t Need to Supplement If I Don’t Want To...Right?
What Kind of Supplement Should I Take?
﻿Supplementing for Life﻿

The Role of B12 in Health 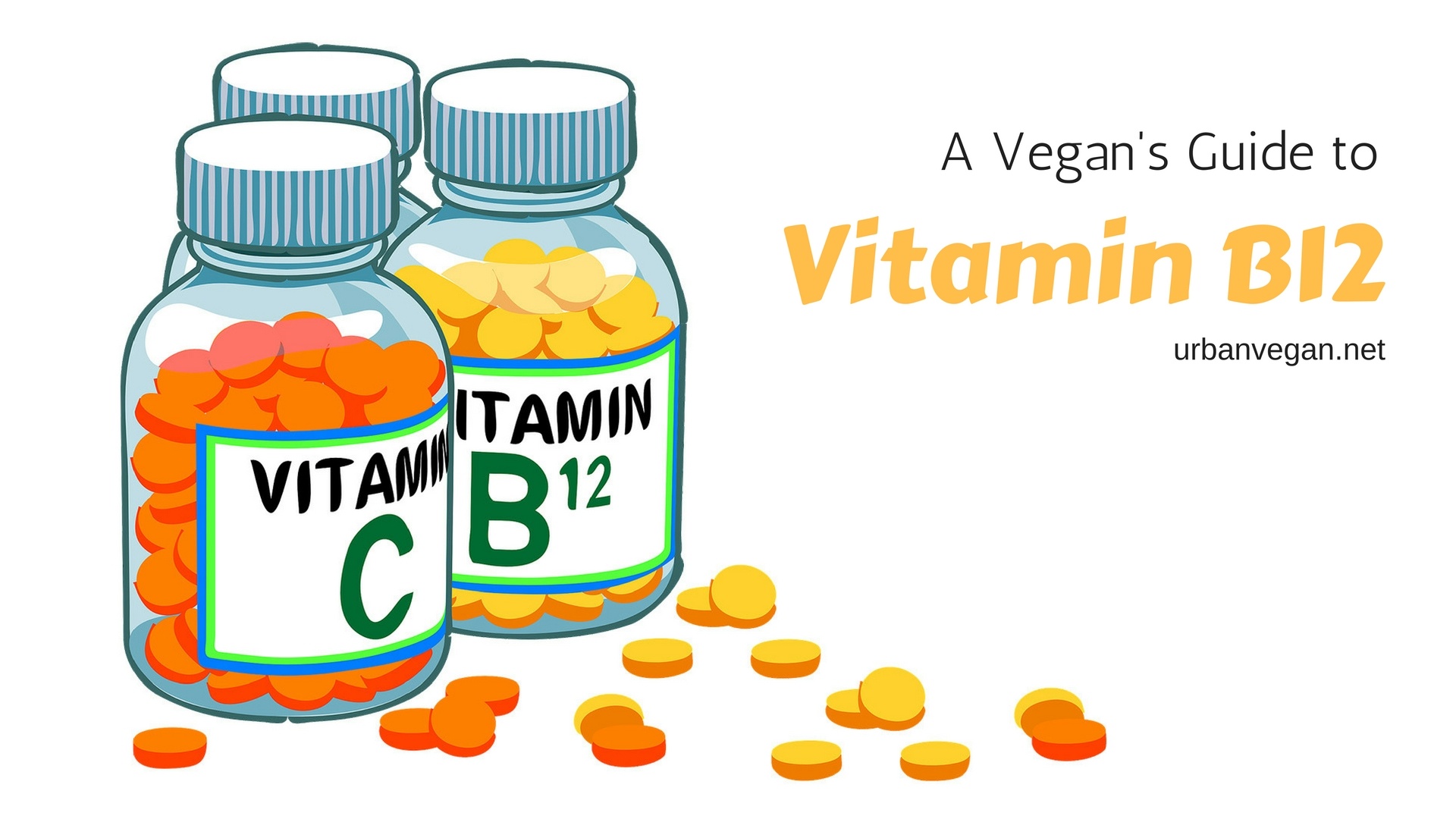 Aptly dubbed the “energy vitamin”, B12 is used in a variety of bodily functions, including but not limited to energy production, the creation of red blood cells (which are responsible for transporting oxygen in your body), DNA synthesis, and the creation of myelin, which is the protective sheath that keeps your nerves safe and allows them to communicate with one another.

These are all critical tasks that are responsible for keeping your body healthy and functioning at its best, especially if you’re an athlete or live an otherwise active lifestyle.

Deficiency in vitamin B12 can be serious, and nearly half the United States population has suboptimal levels, with vegans and vegetarians making up a large portion of that group.

Because few plant-based foods provide enough of this vitamin, those who don’t supplement B12 are at risk for consequences as serious as blindness and brain abnormalities. Other unpleasant side effects include anemia, gastrointestinal distress, and memory problems or behavioral changes.

Luckily, vegans and vegetarians can still thrive while consuming an animal-free, plant-based diet - it just takes a little research and supplementation to keep your levels of this essential nutrient topped off.

Am I Getting Enough B12?

Healthy adults only need a few micrograms of B12 per day - usually somewhere between 2-4mcg daily.

However, because your body absorbs only a small amount of B12 at a time, compounded with the fact that few non-animal foods - nutritional yeast, seaweed, and some mushrooms - contain the nutrient, vegans and vegetarians should supplement with a higher dose - a pill with roughly 100mcg will be enough to ensure you’re getting enough to keep your body functioning well.

While there are a small handful of plant-based foods that provide vitamin B12, these should not be relied on as the sole source of B12.

While hotly debated within the vegan community, it is a simple fact that one cannot live a healthy plant-based life without supplementing their diet with a B12 pill.

Problems with Reliance on Food Sources

In most cases, yes, there is a clear preference for whole-food sources of a nutrient over a manmade supplement every day of the week. However, in the case of B12, it simply isn’t possible to get enough of the vitamin through diet alone.

Vegan foods like Red Star nutritional yeast (the brand name here is important) are among the few plant sources of vitamin B12, but even then, there are external factors that can affect the amount of the nutrient per serving.

For example, B12 is a highly light-sensitive vitamin, which means that it loses potency over time the longer it is exposed to the light. This presents a problem, as the Red Star nutritional yeast at your grocery store is probably stored in a clear plastic bottle or bulk bin.

While the nutrition label might say a certain amount of micrograms per serving, that may not translate into a) how potent the vitamin is at that point in time, and b) how much will be absorbed by your body.

While foods like Red Star yeast and other fortified foods might provide some B12 on their labeling, vitamin B12 deficiency isn’t something to gamble with. The only reliable way for plant-based eaters to get enough of this nutrient is through supplementation.

Does That Mean Veganism is Unnatural?

It is very trendy these days to get “back to basics,” with a lot of emphasis on the word “natural” - things like the Paleo Diet, which touts the benefits of “eating the way ancient man ate.”

From food to medicine, there is a whole movement around the idea that we should only be doing the things that come “naturally” to us.

Of course, the idea that there is an essential vitamin in a plant-based diet that must come solely from a supplement is enough for some to deem veganism “bad” solely because it is “unnatural.” How could someone possibly eat a diet that they clearly weren’t “designed” to eat?

I find this argument that unnatural somehow equals bad to be a weak one, especially when it comes to a plant-based diet. As a modern society, nearly every aspect of our lives is “unnatural” - even people 100 years ago wouldn’t have any idea what to make of how we live, much less ancient man.

Air conditioning, hair dye, vaccinations, shoes, sitting at a desk, being monogamous - these are all “unnatural” things that are perfectly normal and accepted parts of modern day living. The fact that a vegan must take a supplement to get enough B12 is deemed as bad, while parents are not allowed to enroll a child in daycare who has not had the proper vaccinations. This goes to show that the “unnatural” argument is being cherry-picked for the purpose of invalidating the benefits of a plant-based diet.

Besides, even if supplementing with B12 does make veganism “unnatural,” is the past really where we should be looking for how to live in the future? At this moment, we’re living in the most ﻿﻿peaceful era in human history, of unprecedented medical ability, and where the child mortality rate is only five in every 1,000 births. Clearly, all of these “unnatural” behaviors are benefiting us humans in a big way.

Above all else, ethical veganism is very different than diets like the Paleo Diet because its aim is to alleviate suffering in the world - not to eat according to the dietary habits of a human ancestor.

It is not a “diet” as much as it is a moral compass, an urge to do what one believes is the right thing to do. For many ethical vegans, having to take B12 through a supplement is a small price to pay for the ability not to contribute to the suffering, pain and death of animals all over the world.

I Probably Don’t Need to Supplement If I Don’t Want To...Right?

On the flip side, some vegans take up the dangerous idea that they can finagle their diets in such a way that they don’t have to take supplements.

Whether from efforts to cut cost, a personal aversion to supplements, or a need to prove that a vegan diet is “natural” and therefore does not need supplementation, these people are not only potentially doing great harm to their health, but they are also, perhaps unwillingly, deterring others from the lifestyle.

Whether or not we choose to be, each vegan and vegetarian is something of an ambassador for a plant-based lifestyle. Though we may not sign up for the job, people may be gauging our health, happiness, and overall satisfaction with the lifestyle when deciding whether or not they want to try it themselves.

Think about how you would view it from someone else’s shoes - if someone was constantly fatigued, anemic, and had trouble with memory loss or behavioral changes, would you want to try their “awesome, all-natural diet”? If there is one thing that would get people to refuse to try a plant-based lifestyle, it is the assumption that one must sacrifice his or her own health for the sake of living a plant-based diet.

In addition to potentially dissuading others from trying a diet free of animal products, refusal to supplement with B12 out of principle is simply taking an unnecessary risk with your health. While deficiency of some nutrients can be reversed, because vitamin B12 deals mainly with the nervous system, the damage caused by B12 deficiency cannot be undone. Once the protective myelin sheaths have been damaged, they cannot be repaired again.

So, even if you aren’t crazy about the idea of supplementing your whole-food diet, remember that veganism is not a competition, and your health and wellness is just as important as the morals and values you stand for.

What Kind of Supplement Should I Take?

When considering the type of B12 to take, methylcobalamin is hands-down the best choice. To understand why let’s first discuss how B12 is absorbed into the blood.

Like many other nutrients, vitamin B12 cannot survive in stomach acid. To be absorbed into the bloodstream, it needs the help of intrinsic factor, a protein produced by the stomach and salivary glands that allow the nutrient to pass safely through the stomach and into the small intestine. Once it makes it there, intrinsic factor dissolves and B12 binds to another protein to transition into the blood, where it’s used to do everything from creating red blood cells to synthesize DNA.

As it requires little effort to be absorbed and crosses easily into the bloodstream, methylcobalamin gets you the best bang for your buck when it comes to B12 supplementation.

In addition to keeping your stores of the vitamin topped off, methylcobalamin has also been shown to help people with impaired kidney function and also helps relieve sleep disorders.

Servings of sublingual supplements usually contain 500-1,000mg of B12 per serving, and tend to be as affordable as other oral supplements, and more affordable than B12 injections or intravenous B12, which must be administered by a health professional and are usually reserved for people who are already deficient or have some gastrointestinal disorder that inhibits the absorption of the vitamin through the GI tract.

Most nutrients, from ir﻿﻿on to protein to zinc, can be found in abundance in plant-based foods, and vegans and vegetarians can, therefore, turn to whole-food sources to reach their daily recommended allowance.

However, in the case of vitamin B12, it must be consumed through supplementation - plant foods simply do not offer enough bioavailable ﻿﻿B12 to protect those who do not eat meat from the serious side effects that can come with B12 deficiency. This is not a knock against veganism, nor a sign that humans are not meant to lead plant-based lifestyles - merely that supplementation of this particular nutrient is required to alleviate suffering - both animal and human!

For the most efficient absorption of this vitamin, look for methylcobalamin supplements that can be placed under the tongue, so the nutrient is immediately absorbed, rather than having to make the difficult journey through the stomach and into the small intestine.

By supplementing with B12 and ensuring you are living your most healthy plant-based life possible, you are setting a good example for others, and showing that one does not have to sacrifice personal health and wellness to alleviate the suffering in the world.

A Simple Healthy Vegan Meal Prep Plan for the Week

Vegan vs. Vegetarian – What’s Difference Between the Two?

A Guide to Vegan Sources of Zinc

What is the Best Unrefined, Natural & Healthy Salt?
A Simple Healthy Vegan Meal Prep Plan for the Week
Vegan vs. Vegetarian – What’s Difference Between the Two?
A Guide to Vegan Sources of Zinc
Your Guide to Vegan Breastfeeding