The sole purpose of makeup primer is to help your makeup last as long as it can with little touch ups required, but finding such a product is a bit complicated when you take into consideration all of the different skin types.

Having some strange combination of multiple skin types myself, I understand how annoying it can be to try and find a makeup primer that works.

My big secret for making my makeup last is using a vegan primer.

Vegan primers are your best bet if you are looking for a product that is made for a specific skin type due to their products having fewer ingredients, while the ingredients that are in the product are there for a reason.

So to help make your choice much easier, I've compiled a list of what I believe to be the top 5 vegan & cruelty-free primers by skin type - see below.

It can be such a hassle to apply makeup on oily skin that I sometimes personally feel like it’s not worth it because you don't’ always get the results you want. But this Studio Pro Foundation Primer changed the game, and it’s now a constant in my face beat regimen.

This primer from BH Cosmetics puts in overtime when it comes to preparing my face for a flawless beauty look. It softens the skin, making it smooth, and it provides full coverage so that you can even wear it alone if your skin is clear.

I also love the fact that it’s paraben free, vegan and cruelty-free, non-irritating and hypoallergenic. Plus it’s long wearing too, so you won’t have to worry about it disappointing you halfway through the day.

This primer will give your face an entirely different look than if you were only using foundation and it makes your skin feel super soft throughout the day. It does give an airbrushed feel and look to the skin - a little goes a long way.

Some reviewers also noted that it’s ideal for concealing wrinkles and reducing the appearance of pores. Plus it keeps the skin looking balanced and radiant all day.

The tiny nozzle is the number one complaint that reviewers had about this primer, which sometimes made it difficult to squeeze the contents out 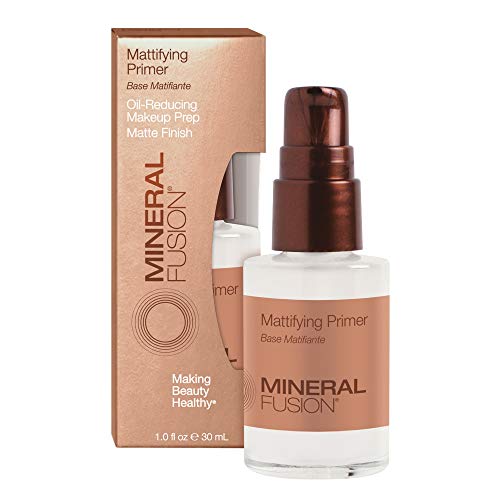 Applying makeup to oily skin is probably one of the most frustrating concepts to have to deal with.

Having this type of skin myself, I can relate to this struggle on a personal level, and I have to say that the Mineral Fusion Primer will be a phenomenal addition to your daily makeup routine.

The primer goes above and beyond to fill in lines, minimize pores, and create as smooth, even canvas for your foundation.

Mineral Fusion’s primer is 100% vegan, gluten free, non-GMO, hypoallergenic and contains natural antioxidants to protect your skin and control shine throughout the day.

The mattifying component of this primer is spot on. Many users appreciated that the product lived up to their expectations of controlling their shine all day long while feeling like their skin wasn’t being weighed down by product. Also, several reviewers noted that the product worked just as well covering any redness that they may have.

The packaging. Even though the primer itself was a definite hit, the packaging is what brought the stars down. Nearly every review reported that the nozzle made it difficult to get the primer out as the nozzle was just too thin, resulting in many having to remove the top and dump a little bit of primer onto their hands instead, or just hoping the product wouldn’t splatter out of the nozzle in a rage and end up on their clothing. 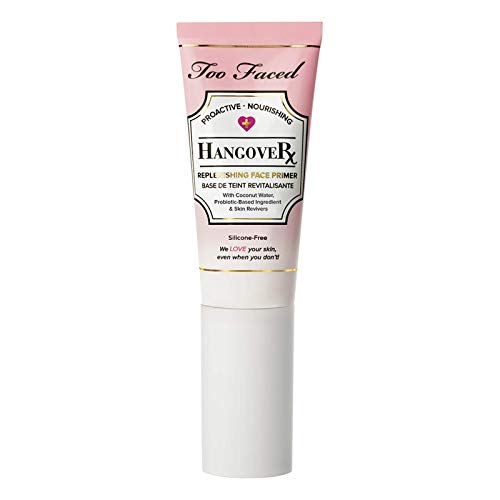 For you readers who are prone to dry skin, yet again like me, finding a primer that will hydrate your skin without highlighting those dry, flaky spots will be ideal.

The Too Faced Hangover Face Primer is a coconut water based product, making it perfect for an active lifestyle that is full of work, play, and the occasional forgetting to take off your makeup before bed!

With the added help of vegan probiotics and antioxidants, the Hangover Face Primer is made to aid in hydration while providing you with a natural looking, dewy glow that lasts for hours.

Wear it alone for a natural finish or pair it with a hydrating foundation for a fuller look!

The lightweight feel of this product makes skin feel like it’s bare naked, a wonderful feeling for those who don’t like the feeling of dense makeup products. While the product is lightweight, it still offers full coverage for undereye circles, discolouration, and even sun spots. The silky-texture and light scent of the product was also much appreciated by the public.

The product is not as effective on older skin (anyone roughly 45+ according to reviews). Users with heavy discoloration found that this product was too thin, and those living in a climate with long, dry winters felt the product just wasn’t moisturizing enough for their skin. 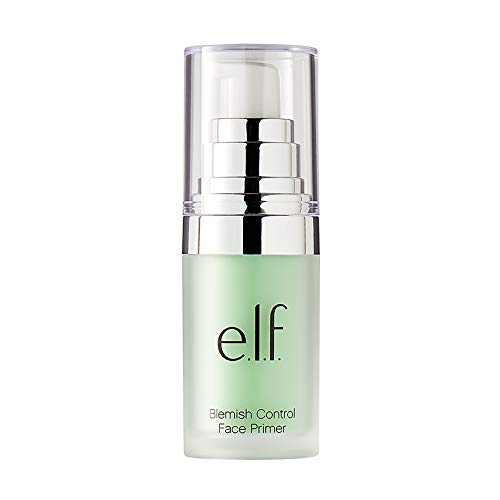 I am happy to tell you that the Elf Blemish Control Primer fulfills all three of these needs.

The product contains 2% Salicylic acid as well as tea tree oil, both of which are key ingredients in fighting acne and reducing redness.

The Vitamin E based primer offers full coverage with just a dollop of the product while keeping your acne-prone skin moisturized.

The lightweight formula prevents pores from clogging, and many users noticed an overall improvement of acne after just one use. The primer goes on smooth and creates a poreless finish that was also appreciated. The tint of green in the product is ideal for anyone battling redness because the green color actually counteracts the red because there are color opposites.

The only real concern users had with this product was that it goes quickly because it is a thick primer.

Too Faced Primed and Poreless Primer

Sensitive skin, more often than not, simply means skin that is sensitive to harsh chemicals or products that are unnatural for the skin.

Those of you who have sensitive skin will love the Too Faced Primed and Poreless Primer for Sensitive Skin due to its formula being 100% oil free and specifically designed for sensitive skin types.

The primer is formulated to minimize the look of pores and regulate oil production to reduce shine, while also reducing discoloration.

The velvety smooth texture goes on with little effort and immediately reduces the appearance of pores and even acne scars. Many users loved that the products lived up to its name, preventing redness, oiliness, and skin irritation. Users with oily skin, in particular, noticed an increase in how long their makeup lasted when using this primer as a base, which was a definite bonus.

The product is not as effective on those with very large pores or abnormally oily skin. Many users also disapproved of the products smell and were put off by the velvety texture as it made the product feel oily even though it is oil free.

Works well with all skin types

If you are someone who either doesn’t know what type of skin they have or maybe you have combination skin, this primer will make a wonderful addition to your makeup collection.

The Physicians Formula Mineral Wear Correcting Primer is dermatologist approved, making it great for those who see a doctor for your sensitive skin.

The primer is formulated to reduce fine lines, wrinkles, and redness while minimizing the look of pores and keeping your skin hydrated.

The product is oil free, but still moisturizing making it great for both dry and oily skin. Its fragrance-free, paraben free formula makes it great for sensitive skin types as well. The primer is also non-comedogenic, meaning it will not clog your pores, making it perfect for those with acne-prone skin. It’s an all in one product!

The primary complaint from users was that the applicator did not work properly and it did not dispense much of the product at one time. Several users also felt the product was too runny or thin for their liking.

Why Vegan Primers Are Better for Your Skin

Vegan makeup primers are better suited for human skin due to the product(s) being natural and free of any animal bi-product such as uric acid (extracted from dead cows) and beeswax. These primers are also ideal for those with sensitive skin since they often have fewer ingredients in them, offering less of an opportunity for skin to react negatively.

This is something that many people do no think of because we assume that non-vegan makeup companies have our best interest in mind when that’s not necessarily true all of the time.

You know the rule of thumb, “if you can’t pronounce the ingredients then you probably shouldn’t be using (or eating) that product”? Well, that is absolutely true.

The majority of those impossible to pronounce words are either harsh chemicals or a fancy term for animal-derived ingredients such as animal fat or animal-based oils.

Vegan makeup primers are free of animal-based ingredients and nearly every word in the ingredients list is easy to read and understand.

What Makes Non-Vegan Primers So Dangerous?

Non-vegan makeup often contains a surplus of chemicals that have no business being put on our skin.

For example, Butylated hydroxytoluene, found in many non-vegan makeup products, has a direct link to causing severe skin and eye irritation.

Another common ingredient in non-vegan primers is actually Formaldehyde, which is the chemical used to embalm dead bodies. Formaldehyde is linked to various types of cancer as well as central nervous system damage.

Adding a Vegan Primer to Your Makeup Bag

Making the switch to a vegan, cruelty-free makeup primer will make a huge difference in the health of your skin and longevity of your makeup products.

Being free of any animal bi-products and harsh chemicals such as formaldehyde, purchasing a vegan primer is not only good for the animals but also great for your skin.

Whether you have oily skin, dry skin, sensitive skin, acne prone skin or just an annoying combination of everything, I guarantee there is a vegan makeup primer for you.

The Best e.l.f Primer for YOUR Skin Type