While most eggless mayonnaise is marketed primarily to vegans, who do not consume foods made with animal products, they’re not the only group who can benefit from swapping traditional mayonnaise for a plant-based alternative.

Let’s run down a quick overview of why switching to vegan mayonnaise is a smart move, even if you are not vegan: 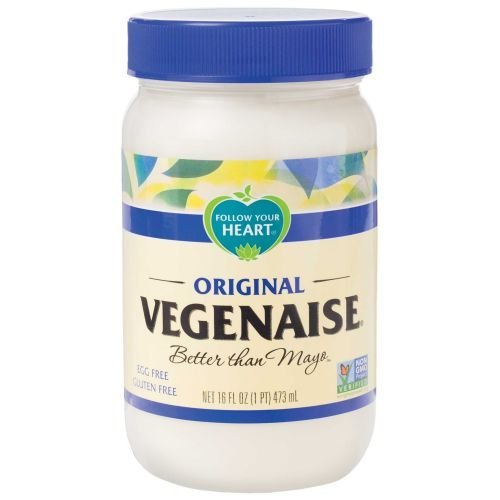 Follow Your Heart Original Vegenaise
Enjoy real mayonnaise taste with our world famous, egg free and all natural Vegenaise Dressing and Sandwich Spread. Made from fresh Ingredients, Vegenaise is perfect for sandwiches, spreads and anything you can think of.
Buy from Amazon

While basically all press cholesterol ever gets is negative, it actually does serve a purpose in your body. This waxy substance is present in all cells of the body, and aids in the creation of hormones, vitamin D, and substances used in digestion.

However, the important takeaway is that your body produces 100% of the cholesterol it needs to function, so anything you ingest is extra and unnecessary.

All meat, dairy products, and eggs contain at least some cholesterol, so the best way to limit cholesterol in your diet is to limit your consumption of animal foods.

Studies have even shown that replacing animal foods with plant foods actually reduces the amount of cholesterol in the blood, even if the fat content of the diet is the same. This means that you can lower your blood cholesterol without having to give up that mayonnaise on your sandwich - all you have to do is opt for the plant-based mayo.

Saturated fat is also on the American Heart Association’s naughty list - as it raises levels of blood cholesterol, the organization suggests limiting consumption of saturated fats.

You guessed it - most animal products, including meats, dairy products, and eggs.

Of course, it’s worth noting here that even vegan mayonnaise is high in fats, so it’s similar to traditional mayonnaise in that it should be consumed in moderation. By nature, mayonnaise needs a fatty emulsifier to actually become mayonnaise as we know it.

However, plant-based mayos definitely take the gold in saturated fat content, and are a smarter choice if you’re going to eat the condiment.

Better for the Animals

Perhaps the most unappetizing part of traditional mayonnaise is its reliance on factory farmed hens. In order to maximize profits and cram as many birds into the same amount of space, the hens that lay eggs for companies like Unilever spend their entire lives in battery cages, wire boxes that allow a hen roughly 70 square inches of space (for reference, a standard sheet of paper measures 94 square inches).

With no room to walk or move, battery cages destroy the hens’ bodies and cause irreparable psychological damage, and when the hens are unable to produce more eggs, they are slaughtered.

The animals are often sick from their living conditions, and the cramped quarters allows illness to spread like wildfire. In 2015, the vegan mayonnaise Just Mayo saw a huge surge in purchasing after avian flu resulted in the death of over 45 million Unilever laying hens.

Chickens are inquisitive, curious creatures that have the capability to not only live in the moment but think about the future – qualities previously only seen in humans and some primates. Because of their intelligence, the conditions in which they must live is especially devastating.

Despite the toll taken on these smart animals, 95% of the eggs purchased in the United States come from caged hens. By choosing a plant-based mayonnaise, you are using your dollar to state that the conditions these animals are kept in are unacceptable – without actually having to give up the food itself.

And when it comes down to it, conditions that are bad for hens are bad for you, too – plant based mayos don’t get recalled due to salmonella and other egg-specific contaminants.

Anyone who’s ever had to replace their creamy 2% milk for skim knows that sometimes, making a sacrifice for your health feels - and tastes - like a sacrifice.

As a vegan who still has a taste for animal foods, I feel this way about vegan attempts at Greek-style yogurt - it’s almost sadder to eat a poor replacement for the food than just not consuming it at all.

However, I can say with total confidence that you will not notice the difference between your beloved traditional mayonnaise and your new vegan mayo.

You don’t have to take my word for it - food writers at sites like Serious Eats, who are decidedly not vegan, held a blind taste test in which an eggless mayonnaise was crowned victorious, even when compared to a leading brand of the traditional stuff.

Contrary to popular belief, you don’t need to jump completely into a vegan diet to enjoy plant-based products. Even if you choose to consume animal products, making a few easy, low-effort switches for certain foods and products can help you keep your body healthy and your mouth happy.

It doesn’t take much effort to swap your traditional mayonnaise for a vegan mayonnaise – brands such as Vegenaise can be found at your neighborhood grocery store, and even convenience store chain 7-11 has opted to use only Just Mayo in its stores.

Even better than the fact that it doesn’t take much effort is that all these health and world benefits can be enjoyed while still consuming a great-tasting condiment that doesn’t taste all that different from traditional mayonnaise. In fact, many blind taste tests by experts suggest that some plant-based mayonnaise is actually better than their egg-based counterparts.

By making these few, small changes in your diet, you can improve your health and improve the plight of laying hens around the world. It’s a smart, healthy, and delicious choice!

Follow Your Heart Original Vegenaise
Enjoy real mayonnaise taste with our world famous, egg free and all natural Vegenaise Dressing and Sandwich Spread. Made from fresh Ingredients, Vegenaise is perfect for sandwiches, spreads and anything you can think of.
Buy from Amazon
Sharing's Caring

Vegenaise does actually taste good. Definitely less heavy than what I remember mayo to be. When part of a “salad” base though, it does thin out a lot.