Before going vegan, jerky was one of my favorite snacks.

Salty, portable, and high-protein, it was the perfect snack to tuck into my bag for a long road trip, a day at school, or a long hike.

Once I went meatless, I thought I’d be off jerky for good, or worse, stuck at my food dehydrator, trying to dry weird little tofu slabs into the chewy strips I used to love.

Lucky for me (and you!) vegan beef jerky is alive, well, and a thing!

Compassionate eaters have their choice of several types of vegetarian jerkies, which are made from a variety of foods, and come in countless flavors.

While traditional jerkies are made from the flesh of animals like cows, chickens, and turkeys, vegan jerkies have some combination of the following bases: seitan (wheat gluten), soy, or mushrooms.

Already used to make convincing meat amalgams, seitan is a great base for vegan jerkies because of its chewy, “meaty” texture. This makes a high-protein, low-calorie jerky that has a pleasant chewiness that ranges anywhere from soft to super-tough, like the traditional stuff. While delicious and nutritious, this jerky base is not gluten-free, so it should be avoided by celiac sufferers and other people who need to eat a diet free of gluten.

Soy, the ubiquitous vegan food, is another favorite base for a chewy vegan jerky. Most companies use “defatted soy flour”, also known as TVP which, like seitan, is low-calorie, high-protein, and super nutritious. Unlike seitan, this is a gluten-free option if the product is flavored without soy sauce, or uses gluten-free tamari to flavor the jerky.

Some companies also offer jerkies made from mushrooms, which provides a lot of vitamins and minerals, in addition to protein, and brings a different texture into the flavor mix.

Now that we know what ingredients tend to be the base of these jerkies, what are our options as far as products go? There are four brands that are the pillars of the vegan jerky world, and each of those provides several options as far as textures and flavors.

Use our guide below to help make your snacktime decision.

Each of the jerkies below is 100% animal-free, available to order online or purchase at your local supermarket or health food store, and is super delicious and nutritious. 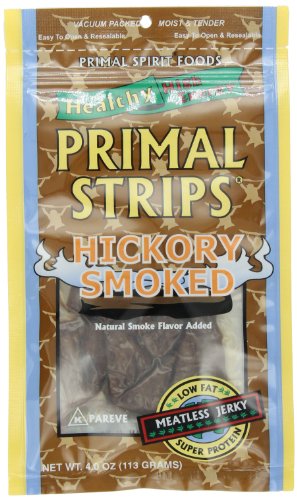 Primal Strips are one of my personal favorite vegan beef jerkies.

They are made from soy, seitan, and shiitake mushroom, depending on the flavor and have about 100 calories and 10g of protein each, which makes it a great protein option on the go.

The texture of these strips is fabulous – whereas some jerkies can be tough, difficult to chew, and hard on the teeth, the seitan strips are moist and almost wet with tasty sauce. The Thai Peanut flavor is a real winner, and it has a great texture and protein-to-calorie ratio.

Of all the flavors, the Hot & Spicy variety seems to get the most negative reviews on both taste and texture. Additionally, the texture of all the strips is a little softer than traditional beef jerky, so if you’re looking for something tough, you may need to let these dry out a little out of the packaging. 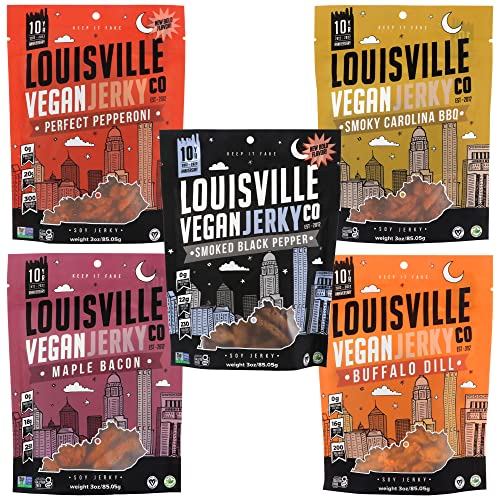 Each serving contains about 70 calories and 6-7 grams of protein. The company uses non-GMO soy products in all their jerkies.

Celiac sufferers, rejoice! All of Louisville Jerky Co.’s jerkies are 100% gluten free, as they are made from soy and use gluten-free tamari instead of soy sauce. Unlike most jerkies, these are a great snack for people who have celiac disease, food allergies or are sensitive to wheat. Reviewers also note that this product has all the pros of jerky – namely the texture and taste, without the negatives, like muscle fibers getting stuck in your teeth.

Some Amazon reviewers noted that the bags they received from Amazon had mold issues. The company notes that this sometimes happens with third-party suppliers, due to warehouse mishandling. If you encounter a bag that has mold, you should contact the company, as they seem passionate about correcting this issue. 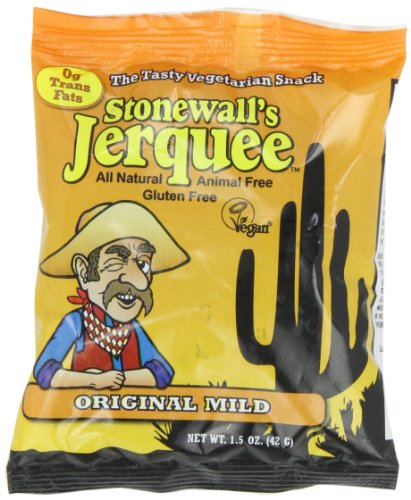 Stonewall’s Jerquee is the original vegan & vegetarian jerky and comes as small jerky “chunks” with a slightly soft, but not moist texture.

Each 1.5-ounce pounce contains about 160 calories and 14 grams of protein.

Vegans who are grossed out by ultra “meaty” things will rejoice – these little high-protein chunks provide a savory taste and toothsome texture, but don’t taste as much like the real thing. These won’t fool any carnivore, but they will provide an animal-friendly, high-protein, and super tasty snack. Reviewers also appreciate that these are a non-GMO product.

While some people appreciate the texture, others find the chunks a little too dry and crumbly. Also, take caution if you’re sensitive to spice – some of the hotter flavors were intolerable to people who don’t eat things with much spice. 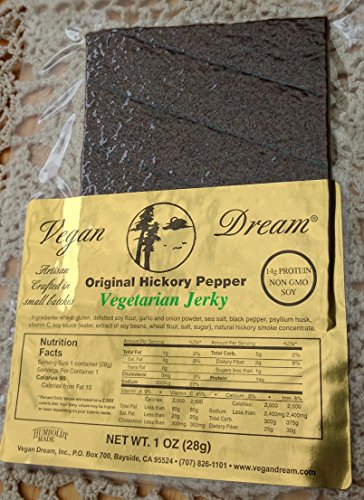 If you miss the “rip-and-chew” texture of traditional beef jerky, Vegan Dream jerky is the product for you.

Tough and toothsome, this product is a hit with people who are looking something to mimic traditional jerky, rather than a completely separate vegan product with its own taste and texture.

Vegan Dream uses a combination of wheat gluten and soy flour to create the base for its jerkies, and each serving of the jerky has about 90 calories and 14g protein.

The texture is spot-on for traditional beef jerky – no softness or moisture here! Vegan Dream’s texture has won over even the most passionate jerky lovers, and reviewers note that the hickory pepper flavor really gets the beef flavor down spot on. This is a product for someone who wants a jerky that tastes like the real thing and isn’t disturbed by vegan products that really feel like meat.

While the texture is spot on for traditional jerky, some reviewers note that the only flavor that really gets the job done is the hickory pepper, while teriyaki, hot chili, and cowgirl are a little bland and leave something to be desired. Choose the hickory pepper flavor if you’re looking for a chewy snack that really packs a punch in the flavor department.

What Else Can I Do With Vegan Jerky?

While vegan jerky is the perfect snack, that doesn’t mean it has to be banished to snacktime only – there are tons of fun and creative ways you can add this stuff to your regular meals. It’s the perfect way to add some flavor and a protein punch to breakfast, lunch, or dinner!

At breakfast, you can add chopped jerky to your tofu scramble, or crisp a piece of rehydrated jerky in a pan as a fun alternative to “bacon.”

When lunchtime rolls around, you can add bits of jerky to a cup of your favorite instant noodles, use it to top a salad or baked potato, or tuck it between bread with lettuce, tomato, and vegan mayonnaise as a twist on a BLT.

Jerky really shines at dinnertime! Sprinkle some chopped jerky in with your favorite roasted or sauteed brussels sprouts for a healthy, protein-packed side dish, or add it to any soup or stew recipe. Think of any instance where you might have used “bacon bits” in the past, and let your imagination run wild!

All the Protein, None of the Suffering

Vegan jerky is a fantastic snack idea, as it’s low-calorie, portable, high in protein, and has plenty of options for people who have allergies or sensitivities to certain foods.

There are plenty of ways to use it beyond simply tucking into your bag or lunchbox, and with so many flavors available from these companies, you won’t ever get bored!

Do you like tough, chewy jerky, or a softer variety with a lot of sauce and flavoring? Allow your personal preferences and your dietary needs to guide your decision. Many of the companies above offer “variety packs”, so you can try a little of each flavor and decide which one is your favorite.