Gummy bears are such a fun treat and have a warm place in my heart.

Every summer when my family would go camping, my best friend always tagged along. Around midday, we'd take a bike ride to the little campground supply store and load up on all the gummy candies; Sour straws, starburst, and of course gummy bears.

Then we'd take them back to camp and enjoy them while talking for hours.

Gummy bears are connected with such good memories for me. Plus, I just love their fruity flavor and gummy texture.

They seem so innocent, those gummy little bear cubs.

I've put together a list of vegan gummy bear brands for you consider because no one should go without these cute treats! 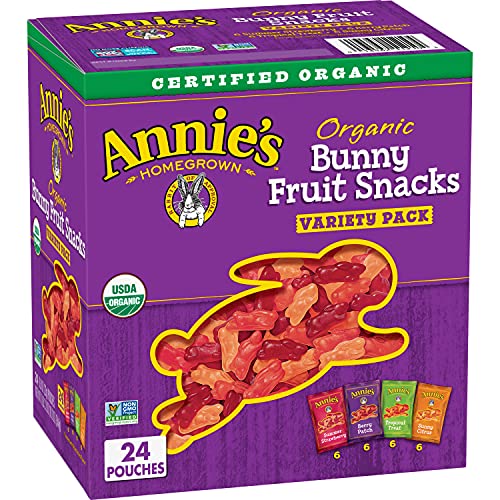 If you know Annie's, you won't be surprised that their take on a gummy bear is in fact, a bunny. I'll let it slide since bunnies are cute and it is the company mascot.

Annie's is a great brand whose founder started by selling mac n cheese from the trunk of her car! Ever since then the company strives to be more ethically conscious every year.

Their gummy bunnies have an excellent fruit juice taste since they avoid artificial flavoring (and coloring). These are stretchy and will dissolve as you suck on them. 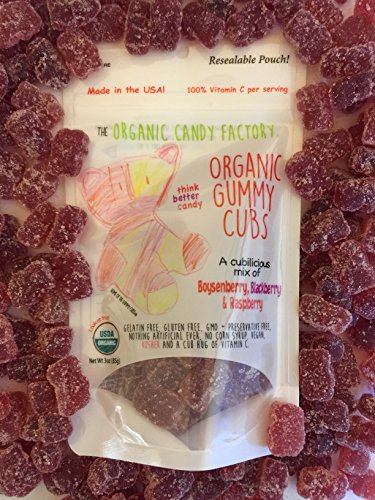 The Organic Candy Factory's Gummy Cubs are a delicious, vegan treat that comes in two choices: Mixed Berry--which flavors include Boysenberry, Blackberry, and Raspberry—and Peach. These flavors help this brand stand out from typical fruit options. What also makes these a little special to me is the resealable bag. I'm a sucker for good packaging!

Theses vegetarian gummy bears are the first organic, kosher gummy bear in the world! They are a little stickier than other gummy bears and are also sugar coated but is pleasant and not too sweet.

A bonus for buying these gummy bears is that a percentage of every sale is donated to Hope North—a refugee camp in Uganda that also includes orphans and ex-child soldiers. 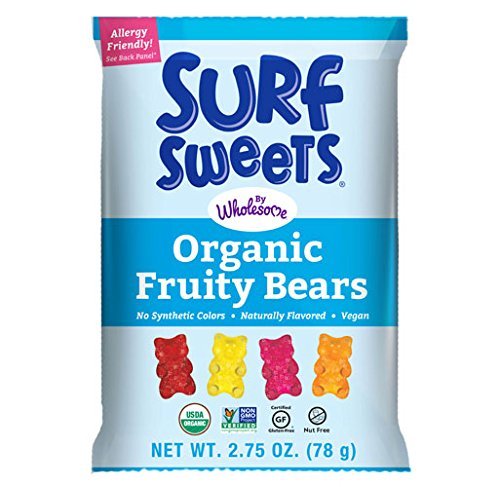 Surf Sweets offers three type of gummy bears but beware the regular gummy bears use gelatin and are therefore not vegan. They do offer two gummy bear types that are vegan though—the organic fruity bears and the sour berry bears.

Goody Good Stuff took years perfecting their gummies. They wanted something without gelatin (an animal byproduct), but that would still be clear, smooth, and have that gummy texture that everyone loves. These little koalas are the result of all that work.

Instead of gelatin, they use a plant derived bio-gum technology. Also, they are colored with natural things like radish and carrot, which is important because some dyes are not vegan.

Now, when Goody Good Stuff first came out with these gelatin-free gummy bears, they contained beeswax, much to the dismay of vegans, and have since replaced all their beeswax with coconut oil!

Goody Good Stuff's vegan gummy bears have a smoother, softer texture than non-vegan gummy bears. You might notice they will eventually dissolve in your mouth. Not a bad thing in my opinion. 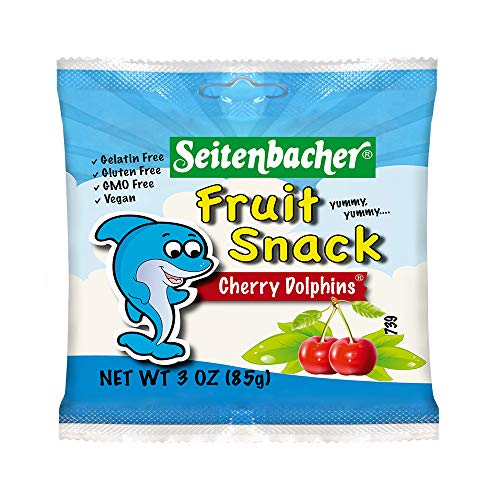 Seitenbacker is a family-owned, German company that has found its way into American homes.

This company decided to get creative with their gummy bears by shaping them into strawberry alligators and cherry dolphins. Not technically gummy bears, but still a cute gummy animal nonetheless.

These gummy treats are made with real fruit juice and are yummy yummy - so says the package. I hear they make a great ice cream topping if you've got any vegan ice cream tucked in the freezer.

They are flavored and colored naturally and use apple pectin as their primary jelling agent! These gummy animals don't have a lot of ingredients, so it makes it much easier to see their veganism. 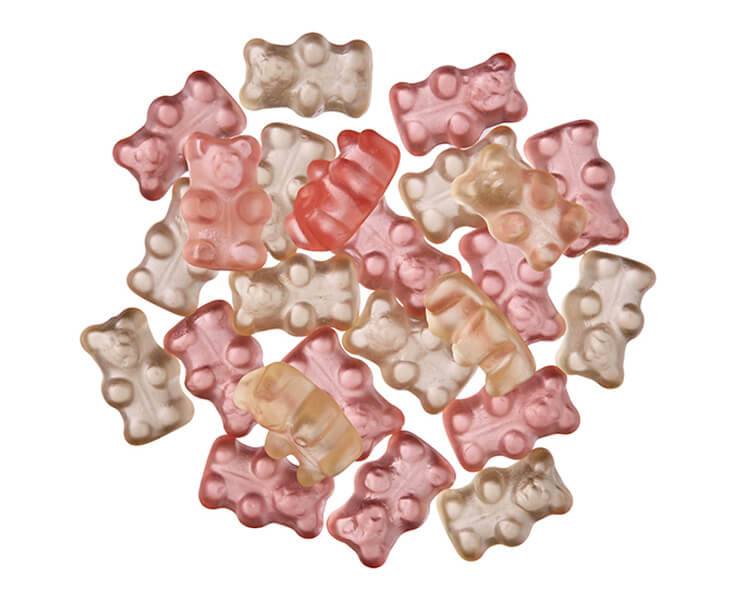 Squish Candies is an artisan candy company that likes to have fun with non-traditional flavors. They operate on the idea that you don't have to be a kid to enjoy candy. They absolutely love what they do, which is why they named themselves Squish, like a cute, loving hug.

Squish makes a cool vegan gummy bear that is based on prosecco. If you aren't sure what prosecco is, it's Italian sparkling wine (like France's champagne). These bubbly gelatin-free gummy bears come in white and rose. Some people enjoy soaking gummy bears in alcohol for a fun party treat, and these Prosecco gummy bears would be a perfect treat for that!

They have a whole vegan section in their store where you can find a good variety of gummy candies to try. Some include dinosaurs and wicked witches.

Unfortunately, Squish doesn't provide an ingredient list, which is more than a little frustrating. We'll just have to trust them on their claim to vegan until an ingredient list is posted and we can confirm for ourselves.

What information they do offer can be found in their FAQ: “Vegan gummies are gelatin-free and do not contain any products derived from an animal like dairy, honey, or beeswax.”

Why Most Gummy Bears Aren't Vegan

Why are most gummy bears not vegan?

There are a few reasons for that.

The biggest is gelatin.

Gelatin is a thickening agent that gives gummy bears it's springy, gelatinous texture. However, gelatin is made from the ground bones, skin, and even connective tissue of animals.

The second reason a gummy bear might not be vegan is because of beeswax. Several companies - like Haribo - coat their gummy bears in beeswax, mostly just to keep them from sticking together.

The final reason a lot of gummy bears are not vegan is because of red food color number 4. This food coloring is made from millions of ground bugs.

You may notice that some of the gummy candies that are “vegan”, such as Swedish Fish and Sour Patch Kids, use red food color 40. This is not the same as 4 and is derived from petroleum, which is not animal derived.

However, these food colors are being tested on animals to determine if they are harmful to humans. Therefore a lot of food dyes are not cruelty-free.

With that said, it may just be safest to look for naturally colored gummy bears. These will use fruit and vegetable juices, extracts, and powders to give their candy color.

Keep an Eye on Gummy Bears

If you love gummy bears, then I suggest keeping a keen eye on the ingredient lists because they seem to change a lot. Hopefully, that means more gummy bears will become vegan, but it could also mean the opposite with some companies!

Don't forget that just because a company sells one vegan gummy bear, doesn't mean all their gummy treats are vegan. Most brands sell both. Make sure to look out for the things I've mentioned (gelatin, beeswax, and food coloring), and you'll have no issue figuring out if a gummy bear is vegan or not.

Yum! I love gummies, and they were definitely something I was missing when I moved over to a vegan diet. I was recently in Germany and found the absoulte best vegan gummies I have ever tasted! But sadly they do not sell them in the USA 🙁
Thank you for the suggestions I will be on the lookout for these.

I would like to know the name of the German vegan gummy bears that Michele spoke of on 8/24/17. Thank you.

I was just in Germany and found vegan Gummi bears and berries at the Bären-Treff. They are delicious, especially the berries made with real and corresponding fruit juice. Not just grape juice. I can’t stop eating them.