Begin Vegan doesn’t gaurentee a healthy meal, which means it might not always line up with you’re philosophies or health concerns.

So if you are the type of Vegan who has gluten sensitivities, suffers from Coeliac disease, fibromyalgia, or maybe you’re just allergic to wheat, then these gluten-free vegan recipe books will be perfect for your everyday cooking needs.

Most people relate eating gluten-free and vegan to boring and tasteless meals but you’re much wiser then they are.

It can totally be fun and delicious if you have the right resources on hand.

Here are 6 of the best vegan gluten-free cookbooks… 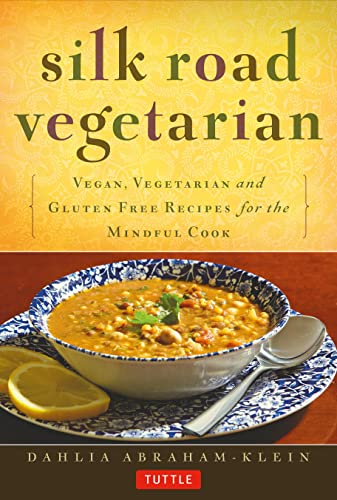 If you have a lot of vegan cookbooks, then you already know how boring they may seem after a while.

But you’ll be happy to know that Silk Road Vegetarian is a breath of fresh air.

The book dives deep into the cultural and spiritual traditions of the Silk Road to show how Asian cultural traditions have influenced the cuisine.

If you’re like me, you might think that cooking gluten-free vegan Indian dishes would be complicated, but with this book it’s not.

Dahlia takes you on a personal journey through this book, making the cooking experience enjoyable, fun and SUPER easy that anyone can do it.

The majority of the recipes use ingredients that you can probably find in your pantry or local market, but yet the flavors are gourmet.

Some notable recipes in the book include: the Persian herb stew (Gorbeh Sabzi), the Stuffed Acorn Squash, and the Stuffed Eggplant.

Highly recommended for anyone looking for delicious and unique recipes, whether you are vegan or not. 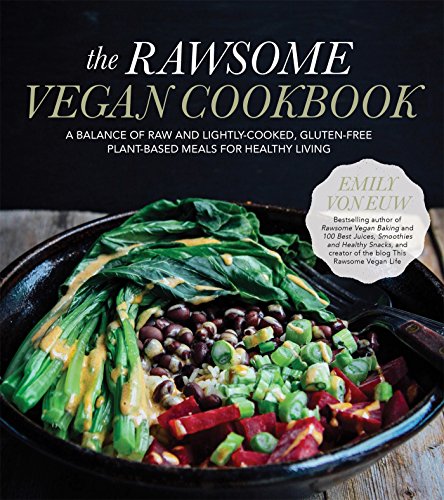 A Balance of Raw and Lightly-Cooked, Gluten-Free Plant-Based Meals for Healthy Living

The Rawsome Vegan Cookbook may not change the raw vegan world as we know it but it is a great start for anyone looking to transition into fun and fabulous raw-vegan lifestyle.

This book proves to be a great asset for beginners because you aren’t required to own a dehydrator, which is often a staple in the raw food world.

Regarding the actual recipes, they are beautiful, healthy and dare I say – they taste amazing! 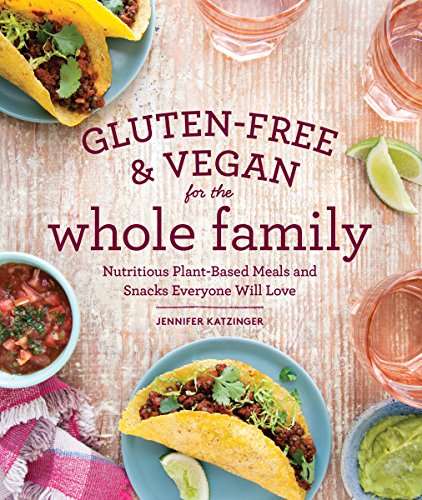 Gluten-Free & Vegan for the Whole Family

Nutritious Plant-Based Meals and Snacks Everyone Will Love

This gluten-free vegan cookbook has been beautifully put together.

You can tell that a lot of thought went into the simple things like the design and layout, which I am a sucker for.

The recipes inside Gluten-Free & Vegan for the Whole Family are Dairy-free, egg-free, gluten-free, and mostly soy-free.

They are arranged by meals (including snacks), are kid-friendly, and will make planning your next gluten-free vegan meal, easy for the whole family.

This book is great for anyone who’s just starting out with learning how to cook gluten-free and vegan recipes, which means that the most advanced cooks might not feel challenged enough.

Beginners be warned, even though this is a great book for you, there is still a fair amount of preparation time that’s involved with a lot of these recipes. 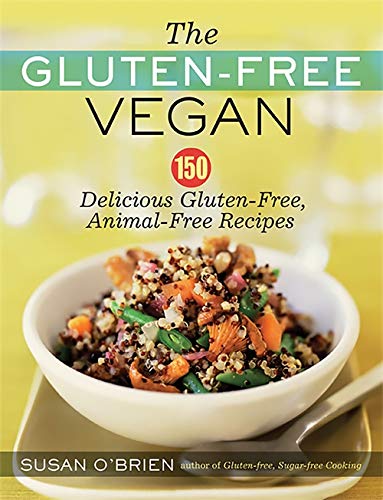 The Gluten-Free Vegan offers many recipe solutions for anyone looking for a tasty approach to healthier eating.

If you have celiac, and you’ve tried to go vegan, after a few days you’ve probably thought to yourself “There’s nothing to eat!”.

But with this cookbook, that’s not true.

You can enjoy a plethora of great tasting meals without making any sacrifices.

Plus you’re stomach with thank you for it 😉

This cookbook contains 150 healthy recipes for a wide range of dishes that are both gluten-free and vegan.

The recipes are quick, easy and were written by a food-allergy sufferer and gourmet cook, so you can bet you’re going to get some delicious and healthy meals in this one. 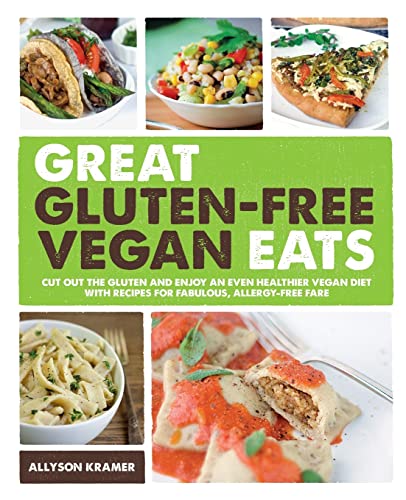 Cut Out the Gluten and Enjoy an Even Healthier Vegan Diet with Recipes for Fabulous, Allergy-Free Far

Gluten-free recipes are a lifesaver for Celiacs, regardless if they are Vegan or not.

And as a Celiac you will find yourself reaching for this cookbook (Great Gluten-Free Vegan Eats) time and time again to plan your daily meals.

Author, Allyson Kramer does a great job at managing the difficulties of eating gluten-free while at the same time making it fun and enjoyable.

Another thing that Celiacs will love is the fact that this book handles the recipes without dairy (hence why it’s vegan) which can be a major sensitivity issue with other foods.

In total there are 101 fully-photographed recipes in Great Gluten-Free Vegan Eats proving that eating a gluten-free and vegan diet doesn’t have to be a sacrifice.

In fact, it can actually be fun!Here’s a few of the notable recipes from the author: 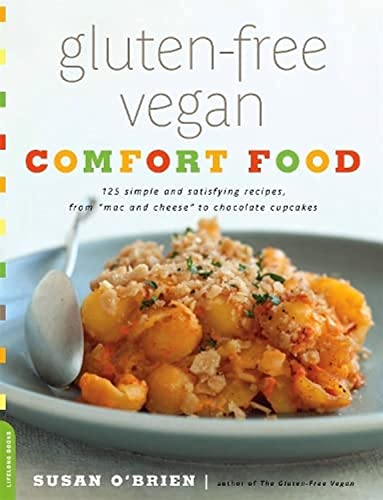 125 Simple and Satisfying Recipes, from “Mac and Cheese” to Chocolate Cupcakes

This time, she put together some quick and simple gluten-free and vegan versions of everyone’s favorite comfort foods.

If you’re family and friends aren’t vegan and gluten-free, this book does a great job of providing them meals that they are familiar with but still taste great.

Just be prepared to set some time aside as a lot of recipes do require time.  Also be aware that there might be some ingredients that you may not already own but are easy enough to get at your local supermarket.

Some notable recipes from the author include: